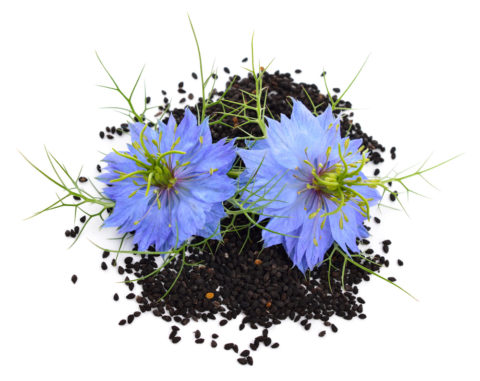 Prophet Mohammed is believe to have said that the black cumin heals all disease, except death.  That is why it is called “Habbatul barakah”, the blessing seed, in the Arab world.

Black cumin is a part of the buttercup family and is an annual flowering plant, which grows about 50 cm is height.  In a botanical sense, the black cumin is not related to the caraway or cumin, even though they are visually similar and can often cause confusion. It is grown in the Middle East and West Asia and all the way to India, but the best quality is achieved in Egypt.

In the 8th century it became more popular in continental Europe, thanks to the Frankish king Charles the Great (768-814), who ordered the cultivation of this plant in monastery gardens as one of the very important medicinal plants. During those times it was called “black coriander” and used as a spice in the bread. Before pepper took over the European cuisine, the black cumin was a very popular spice, due to its full and sharp flavour. At the same time black cumin also became found its way into cosmetics. It was used to make scented water and powder. All this shows that people in distant past considered it important and medicinal.

Scientists across the world are researching active substances and possible medicinal properties of black cumin. More than 800 studies have already been published. Its medicinal properties are also described by the authors of the manual Ščepec vedenja: Zamolčane zdravilne moči začimb.